The Ultimate Guide to Parque Miraflores

If you want to win a bar bet, this could be the question that catches even the locals out, so here goes: ‘What’s the largest park in Seville’s metropolitan area?’  The answer, surprisingly to most people, is Parque Miraflores – this is according to the council’s own website, so before you flood the comments box saying that the Alamillo’s bigger, check out the info on city parks here:

I realise that information on local government sites can sometimes be out of date; it’s always cracked me up that until very recently, Tusssam (the council-run local bus company) still had the prices in pesetas on its airport bus stop at Santa Justa!  So you never know … but in this case, Google Maps seems to agree with the council.

Back to the park … to give you some idea of the size, at 90 hectares it’s three times bigger than the Maria Luisa and it’s relatively new.  In the 1960s it was the site where the builders dumped the rubble during the sudden expansion of the barrio Pino Montano, after a massive influx of people from the countryside caused an unprecedented demand for housing in the city.

In the 1980s, due to pressure from local neighbourhood groups, it was finally cleared. Once the clear-up started, they realised that the park is actually built on the site of a Roman villa (or perhaps even a small Roman village).  Sadly, funds didn’t stretch to fully excavating the site. But bits of Roman pottery and other artifacts still sometimes turn up on the allotments – Los Huertos Las Moreras – which are part of the park.

Parque Miraflores is situated in the district of Macarena Norte, only 2.5 kms from the city walls and 15 mins from the centre by bike.  On entering the park from the south entrance (at the end of Carretera Carmona, turn left before going over the bridge) you’ll find an esplanade of jacarandas and oleanders.  On the left, there’s exercise equipment for ‘older’ people (which I can never resist playing on!).  Walking to the end of the esplanade, there’s a mini-assault course for dogs (I never know what these are called).  Further inside the park there’s a lake surrounded by rushes and willows, as well as pomegranate and olive trees, verbenas, cedars, acacias and different types of palms.  There are several kids’ playgrounds.

There’s the Cortijo de Miraflores, which still houses an Almohad tower (presently closed).  Next to this, keep your eyes peeled for the kingfishers – they sit on the hunting-posts next to the stream.  But you’ll need good eyesight, as they are only the size of a sparrow.  We were lucky enough to see one on our first visit, along with a cormorant, and further on, an egret. If it’s a sunny day, you’ll also see turtles sunning themselves on the bank.

Next to the Cortijo is the SE-30, though you wouldn’t really know it was there – a bridge takes you across it, and it comes as a surprise to suddenly see cars rushing along.  Here you’ll find another lagoon, a street workout for calisthenics, a basketball court, a couple more kids’ playground and a BMX dirt park. I lost count of how many places there were to skateboard and roller-skate …

On a Sunday morning, where Calle Soladores meets the park there’s a market too (even during this pandemic period).  Not sure what it sells, as we only got there in time to see the last vans packing up.

So if you’re into cycling, walking or running, and fancy a change from the riverbanks and the Alamillo, you might want to head out to Miraflores.  And if you just want to find somewhere green and quiet with comparatively few people but still within the city, then this could be the place for you.

Getting there and away:

Bus: 15/16 skirts around the edge of the park (leaves from Plaza Ponce de Leon).

Sevici: From the centre, it’s bike lane all the way. Estación nº 202 at the entrance to park on the roundabout of Avenida de la Mujer Trabajadora and Avendida las Asociaciones de Vecinos.  Link here: https://goo.gl/maps/sF9c7ybsF2VLwkU19

Lots of places in the area and much cheaper than the centre. These are the two best value places, my favourite is Taberna María at 10 Avenida de la Mujer Trabajadora – great food, excellent value and super-friendly service. Then a couple of doors away a Gallician-Andalucian fushion restaurant Furancho. They’re both very popular, so if you want to a table outside at the weekend then you’ll need to reserve. 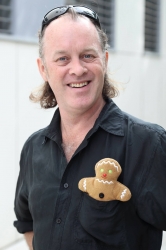 Follow me
John Harrop
John Harrop, originally from Liverpool, divides his time between teaching, teacher-training and dragging a big suitcase full of puppets around Spain for Bat-i-Burrillo Teatro de Títeres.He’s also a mentalist and produces material for Aptis Tutor too. www.aptistutor.com