If you’re looking for live indie folk with world influence music now that things are opening up a little bit, then look no further than Renny Jackson. The one-time (may be still is?) Nirvana guitar wanna-be from Birmingham, UK has been releasing his new album (Seasons of my hand) one song at a time over the past few months and him and his band will be showcasing it next week on Friday 7th May at Sala X.

Tickets are still available, but the capacity is limited. Rafael Arregui will be tickling the ivories and Kenneth Saulnier, the Canadian fiddle player from the French-Canadian folk rock group the 1755 will also be on stage. Dolores Berg on vocals, Enrique Mengual on bass, Raul Medina on drums, Manuel Velasco on sax, Rafel Mira on trumpet and horn and last but not least, Manuel “Ballena” Jiminez on percussion complete the line-up. Miryam Flores is the support act. The album will be available on all digital platforms, and if you download it from his Bandcamp page next Friday, all the proceeds go to the artist. Every little helps …..

This, his third album, kept him going, creatively speaking, through lockdown and the first single “River Roots” has a really catchy chorus. I guarantee it will be your earworm for the day. Thank me later! Renny released the third single from the album, Where should this music be? on both World Book and Shakespeare Day; it’s “a reggae treatment of The Tempest!” The video features amazing live artwork by Patricio Hidalgo Moran as well.

When he’s not being one of Seville’s local rock-stars, Renny teaches guitar and delivers master-classes in community centres, allowing kids from difficult backgrounds to open a door into something creative and fun.  He can often be found jamming with pianist Rafa and guitarist Miguel Bueno.

Hopefully, when life is less restricted he can get back to the gigging and touring that he loves, but in the meantime, he hopes to see you next week. 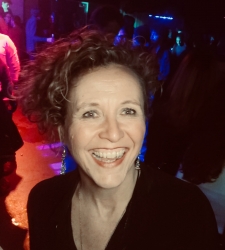 Lucy Carrington
Lucy has a background in fashion and broadsheet publishing.A sports and fitness enthusiast who loves travel, food and fashion, she has been teaching English for the past 8 years in Seville.Lucy can be contacted via Instagram @sparkybakewell