Spain  is a country on its knees. The statistics don’t lie. 50% of young people are unemployed, 400,000 homes have been repossessed since the crisis began and car sales are down by over a third on last year. There is unrest, just this week a proportion of the population down tooled and joined the General Strike. I know it’s all true, every other word uttered in conversation is ‘la crisis’, and in one of my classes I have Maths teacher who lost his job due to the cutbacks, a midwife who’s improving her English in order to leave the country when she’s made redundant in May and a Social Worker whose department has been forced to get rid of 45 colleagues due to lack of money.

But living in the Alameda is like being in a fizzy beer bubble. It seems like life just carries on as normal. The streets buzz with the sound of the cerveza drinking revellers, chattering animatedly outside the multitude of bars and restaurants. They don’t have the heavy, downcast faces of a people struggling to keep their heads above water, in fact alegria seems to permeate their very being. The only change seems to be, instead of drinking several beers across the duration of the evening interspersed with a couple of tapitas, one or two cervecitas now last the whole night, and eating is something you do at home. 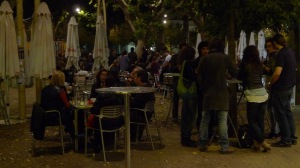 So in this climate, it is astonishing to see new bars and restaurants still opening up. It maybe that they’re appearing where other businesses have gone out of business, but they are opening non-the-less. One example being Quilombo, on Calle Peris Mencheta.

In what used to be an easily missed ice cream shop, Argentine owner Javier, has taken a punt on riding the precarious economic wave and has opened a cute little neighbourhood bar specialising in good wines, quality cheeses and cured meats. It’s a tough challenge, he’s just one of numerous bars all competing for the dwindling Euros of a finite clientele, so Javi’s lain down the gauntlet, and doing what he can to stand out from the crowd. So last night was Sushi night, with Nigiri, Maki and California rolls on the menu, made by a local Sushi rolling expert, on Sunday there is storytelling for kids and next Wednesday a Stand-Up Comedian will hopefully help people laugh away their woes.

It’s early days for Quilombo, which ironically in Argentina means something’s in the shit, but so far things bode well if last night’s raw fish themed event was anything to go by (and regular readers will know that anything involving raw fish is a hit with me). The beer’s cheap (10 cents cheaper than Bar Hercules opposite), the service friendly, and Javi’s offering a free tapa of cheese or cured meats of your choice with your first beer if you mention you are a reader of this blog.

So Che, don’t be a Boludo, and give Quilombo a whirl.