In Search of the Perfect Breakfast

They say, don´t they, that breakfast is the most important meal of the day. Back in Blighty this always meant lining my stomach with a rather functional feast of muesli, porridge or some other oat based cereal. It wasn´t ever particularly a pleasure, just something I did in order to last until lunchtime without keeling over and passing out.

I remember on arriving here in Seville, my first ever flatmate Jose would disappear off for breakfast from time to time, and I´d wave him off thinking, ´oh how continental, eating breakfast out´. But still I´d continue munching my way through a giant bag of rabbit food none the wiser. I can´t remember when exactly this all changed, but one day it did, and from that day onward, I have never looked back. I know this might seem like I’m exaggerating, but honestly I´m not. And I will do my best now to explain.

Breakfast in Seville for me is a snap shot of real daily life not to be found anywhere else or at any other time of the day. Forget tapas, or flamenco, breakfast is what most Sevillanos ´enjoy´ without fail, crisis or no crisis. It is a sacred ritual based around toast, but not toast as we know it. Bread here comes in numerous varieties, the most toastworthies being the Mollete, which is kind of round and soft but crunchy on the outside and the Andaluza which looks like a longish bread roll, but a million more times delicious. Usually it´s white or nothing, but increasingly their brown cousins are creeping into the bars, although if you get there too late, they´re usually the first ones to be sold out.

Ok, I imagine you´re still wondering, ´what the heck is all the fuss about?´ And you´re right to wonder. So I shall continue. As you can imagine the aforementioned bread gets a light toasting, no burning to a cinder here thank you very much, and then comes the crucial part: the oil. Not just a little sprinkling, but huge big glugs of the stuff, until you’ve practically drowned the bread in it. At first this goes against the grain for most northern Europeans who’ve been brought up on a gentle smearing of margarine on their morning toast, but nothing beats bread swimming in vibrant green extra virgin olive oil, and if it’s been infused with garlic cloves, for me that’s even better. 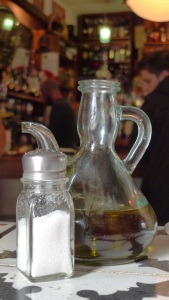 Next, it’s all about the tomatoes. Here you have two options: tomato triturado which has been whizzed to a liquidy pulp or sliced tomatoes (en rodajas). For me it really depends how I feel. Some days I wake up and think today’s a triturado day, and others I just want them sliced. The time of year plays a big part, nothing beats summer fresh, juicy red tomatoes on toast, as opposed to the slightly anaemic ones you get out of season. But to top things off, I for one have to add a sprinkling of salt. Again, totally against the bible of healthy living, but it tastes so good. Now for the meat eaters amongst you, you’ve then got the option of Jamon Serrano or York (good old fashioned pink sliced ham), which I’m reliably told are delicious additions.

And then, you get to the really good bit, which is the eating. There’s something about the oil soaked bread, the acidity of the tomatoes and the salty tang on top, that is literally like being in heaven. And then if you imagine this experience outside a spring, sun soaked terrace cafe inhaling the sweet smell of orange blossom, while watching the world go by, you might just get some inkling why I’m living in Seville. And that’s without even mentioning the amazing coffee and deliciously sweet freshly squeezed orange juice that’s in season right now.

So after waxing lyrical on the delights of the tostada, I should tell you where best to indulge in this simple breakfast time pleasure. And it’s at this point that I have to admit that I am a desayuno tart, that is to say, I get around a bit. My long time favourite has been Corral de Esquivel, because it’s so close to my house and has the warmest welcome from morning breakfast barman Ivan, but sometimes I have been known to go astray. Piola is great for long lie-ins on weekends as it still serves breakfast until 1pm, and has the most extensive selection of brown breads available, and Cafe Hercules caters for the even later morning risers. A recent discovery for me has been Habanilla Cafe (thanks Esther) which has the most flavoursome seeded brown bread that actually tastes both good for you and delicious at the same time and again serves brekkie until pretty late. So why not play the field as I do, until you find your own perfect breakfast. 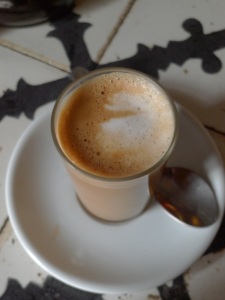