How I accidentally became a groupie in one week

It was a non-descript Sunday evening. I´d been self-exiled in my house writing student reports for most of the day, and a text from friends inviting me to Anima for some live music was a timely excuse to down tools and head out the door into the cool Sevilla night. As I entered the bar I could see my friends in the distance smiling and swaying to the sounds of Profesor Ruina and his band, a three piece led by the aforementioned ´Profesor´, a charismatic wee fella, clad in dark glasses and leather trousers, who seemed to have the crowd eating out of his hands.

Sunday nights at Anima are a wonderful way to bookend the week, the atmosphere is chilled, the music reliably entertaining, and I´m usually tucked up in bed by midnight, ready for the coming week. But on this occasion, I felt compelled to lay down my glass of vino tinto, and start busting some grooves to the eclectic but eminently danceable selection of songs that everyone in the crowd seemed to know the words to, apart from me.

Half way through the set, el profe took a break and a vocal dynamo, in the shape of Miguelito Bueno took the stage and sung in a voice that shook me to my core, and when he announced after singing a couple of songs, that he´d be at the Bicicleteria the following Thursday, I knew it was something I couldn´t miss.

So fast forward a few days to what I think has been one of the most magical and intimate gigs of my life. The Bicicleteria, like many live music venues in Sevilla is tiny, and it´s hard to imagine finding space enough for a band to play. But somehow YellowRed, comprising Miguelito and his mate David squeezed themselves onto the tiny stage and proceeded to capture the hearts and senses of the 30 of us who were mesmerised by the beautiful songwriting and spellbinding rapport between the two artists. I left the Bicicleteria feeling like my heart was going to burst with joy from the whole experience (or maybe the cervecitas had something to do with it).

But that was not to be the end of my week of gig going. Both YellowRed and Profesor Ruina as his alter-ego Dani Mata, were playing on Saturday night, so my night started with an early concert at El Perro Andaluz for a re-visit to the songs of Miguelito and David. By now some of them were starting to sound familiar (in a good way) and the bromance on stage still warmed the cockles of my heart and had me grinning from ear to ear. The Perro Andaluz is once again staking its claim on the live music circuit and seems to have something going on most nights. It´s a cool venue, that ticks the quirky eclectic interior design boxes of guiris like myself and while having a gig at 6pm on a Saturday night feels kind of strange, there were just about enough punters to create an atmosphere.

Following seamlessly on from YellowRed, and just a five minute stroll around the corner at the Corralón de Artisanos in the Plaza Pelicano, Dani Mata and the Callejon del Gato were celebrating 10 years of being in the business. I can only attest to having known about these guys approximately 5 days earlier, but there were clearly some members of the audience who´d been there from the start, and the room radiated a feeling of love and affection for the band on stage (which incidentally included YellowRed at various points of the evening, to further fuel my new found superfan status). 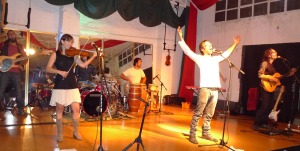 So this is Sevilla, in one week you can find yourself immersed in a
whole world of people you didn´t know existed, but you feel like you´ve
known for ages, leaving you wondering what exciting new adventures and
people lay in the coming weeks ahead to discover.